Aiming to increase the love of contemporary art, architecture and landscapes, reaching audiences of all ages, Fundação Serralves was set up in 1989 and is comprised of the Museum of Contemporary Art and the Park.

This Foundation holds an asset of great cultural and historical value, the Museum, which was designed by the Portuguese architect, Álvaro Siza Vieira, who won the Pritzker Prize in 1992. Casa Serralves (the Villa) is a unique example of Art Déco architecture and the Park within the grounds was designed by the French architect Jacques Gréber, who received the Henry Ford Prize for the Preservation of the Environment, in 1997.

Today, Fundação Serralves is considered to be one of the most successful cultural projects in Portugal, with wide international acclaim.

With regard to the Museum, the new building was inaugurated in 1999. It is a unique building that blends well with its urban surroundings and with the other two spaces that exist there, the Park and Casa Serralves. You can visit the exhibitions here but also admire the building itself.

Casa Serralves will take you back in time, as it is a beautiful example of an Art Déco building from the 1930s, which has been decorated strictly in keeping with that era. It is worth visiting both the interior and the exterior of this building. Don’t miss it! 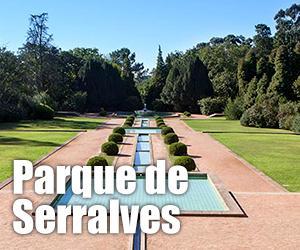 The Park, covering 18 hectares is comprised of various inter-connected spaces, such as formal gardens, woodlands and a traditional farm and is a reference within Portugal's landscape heritage. Despite being in the city, it is so vast that you can really come into contact with nature here and admire a wide variety of plants. In addition, the park has various sculptures that are part of the Fundação Serralves collection.

The biggest contemporary art festival in the country and one of the biggest in Europe is held by Fundação Serralves in June and is called Serralves em Festa. The event, which has free admission, lasts for 40 hours and involves many national and international artists. The programme covers music, theatre, contemporary circus, cinema and photography, among other activities.