The Douro enters Portugal after leaving the Sierra de Urbión in Soria, Spain. The river empties into the Atlantic, at Foz. The Douro is the third longest river on the Iberian Peninsula (has 850 kilometres), includes other rivers, such as the Sabor, Tua or Távora and serving also as the main water source for the irrigation of the wine grapes. The grapes are cultivated on quintas (farms) cut into the sheer slopes tracing the river inland. The harvests eventually find their way down the watercourse to Vila Nova de Gaia where they’re distilled into Port wine. 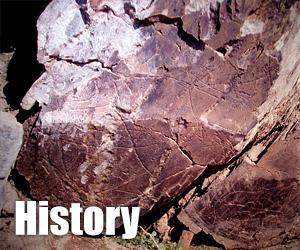 Before reaching the Atlantic Ocean, the Douro River passes through several cities and along the way, are the many areas classified as World Heritage Site, as is the case of New Coa Vila, where is the largest outdoor rock art museum, the Alto Douro Wine Region and finally the Historic Centre of Porto.

In all its passage, the land is fertile, because they are bathed by the waters of this river and we must not forget that the man settled in these areas due to these waters, which could fish for food or water the land they cultivated. For all this, the Douro River is more than a landscape or a navigable means, is history and marks of a people.

There are many legends that attempt to explain the name of this river. One of them says that, by the steep slopes bright stones rolled down the river, which have found to be gold (Douro: from + gold). Another points out that the name may come from the Celtic word 'dur', which means water, but there is another that tries to explain the name of the River with the Latin word 'duris', which means 'hard' and it could be an association to the hardness of the landscapes that are along the Douro River.

Once the river reaches Porto, it passes under six bridges before hitting the sea. The bridges are, from west to east, the Ponte da Arrábida, which once boasted the widest concrete span in the world, the Ponte de Dom Luís I, the most prominent bridge in the city with an undercarriage for pedestrian traffic to Vila Nova de Gaia. Then there’s the Ponte do Infante (with the planet’s longest concrete arch), the Ponte Dona Maria Pia (designed by Gustave Eiffel, maker of some famous tower somewhere, or so we’ve heard), which was once utilized for rail traffic, followed by the Ponte de São João. Porto’s last bridge is the Ponte do Freixo.

In the summertime, children leap off the lower part of the Ponte de D. Luís I into the river, making sure to time their jumps so that they miss the riverboats passing beneath.

The best way to see the Douro is by taking a Cruise of the six bridges. You can catch a boat in Ribeira or in Vila Nova de Gaia. The cruises last about an hour. You can also opt for a longer trip, heading up the river into wine country.